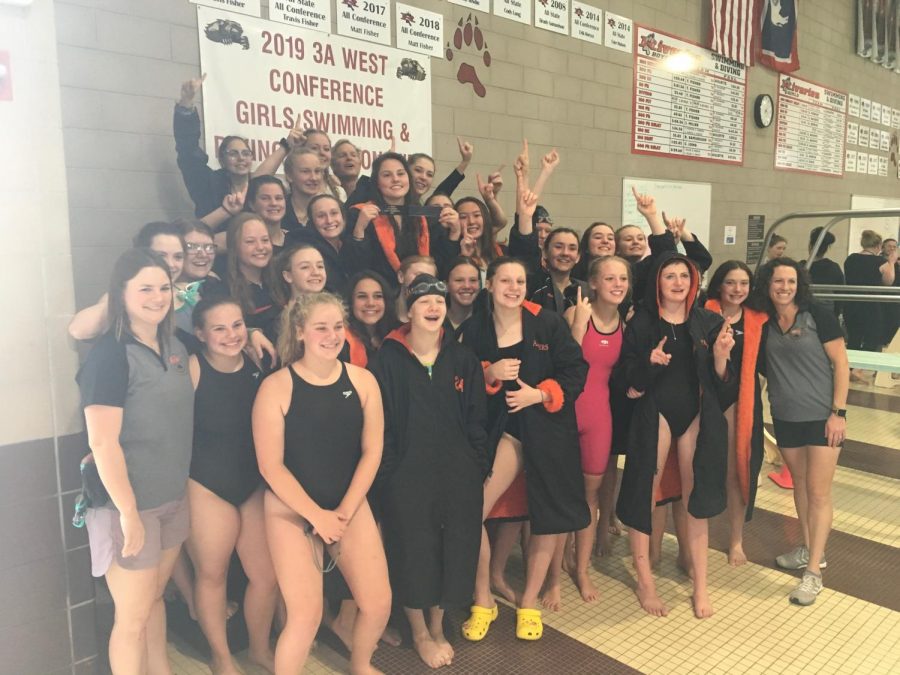 The Powell High School Lady Panther swim team stands and poses for a picture after their win.

Twenty one years ago, the last time the Lady Panthers won the 3A West Swimming and Diving Conference title, the current team members were not yet born.

That all changed Oct. 25-26, when the PHS swimming and diving athletes captured the conference crown during the meet in Riverton.

Even though no Lady Panther won an individual event, PHS piled up points in each event.

“I was really happy about getting second [place] in the 200 and 500,” junior Elizabeth Liggett said. “And that the overall mentality of the team during the conference meet was excitement and nerves.”

Coupled with intense training over the past several months, those feelings helped the Lady Panthers have enough adept athletes to participate in every event.

“I would have liked to swim the 50 freestyle a few more times this season to best my original time,” Liggett said. “But that’s OK, I’ll get it next season.”

In the diving event alone Emma Karhu garnered 36 points. In the 200 freestyle, Liggett got second place with a personal best time of 2:08.48, earning 13 points.

Several other standout performances include the 400 free  relay team of Liggett, Gabby Patterson, Addison Moretti and Anna Fuller with a time of 4:00.35 giving the team another 26 points.

Combining those events with all the others that had equally outstanding performances gave the Lady Panthers enough to tip the scales in their favor.

“I was impressed that we won,” sophomore Lily Halter said. “We just had the most girls in the individual races compared to the other teams.”

State swimming will be contested Nov. 7-8 in Gillette.