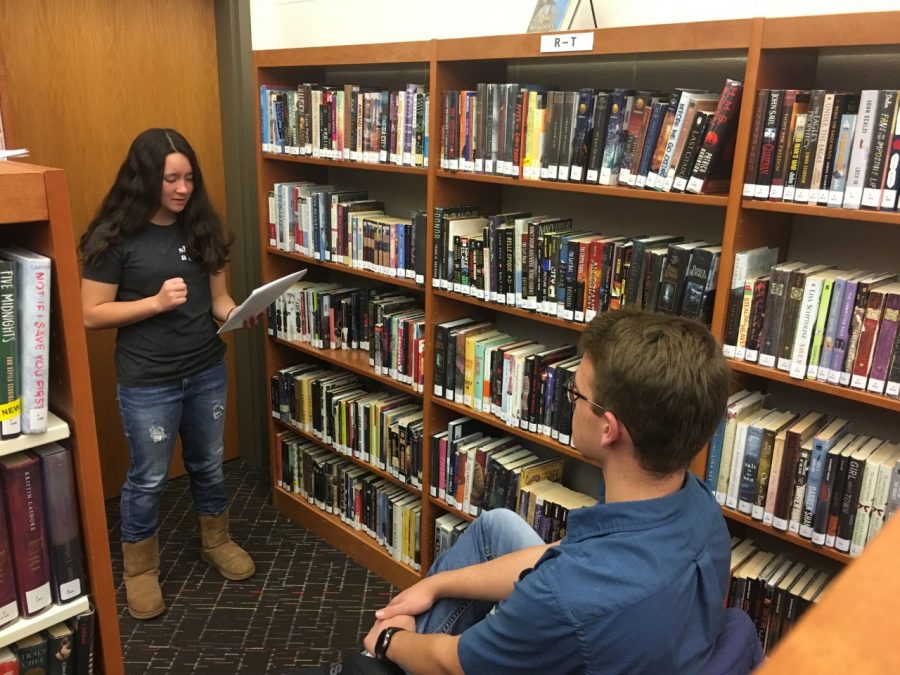 The Powell High School Speech and Debate team has started a club at Powell Middle School to help students learn the importance of public speaking and to provide a group for students who do not belong to other groups (such as sports) to participate in.

“When I got the opportunity I wanted to jump in and try something new and different that I never heard about before,”  seventh-grader Paul Cox said. “I was pretty excited when I heard about it. I think it’s definitely unique and it’ll be a good experience.”

The team meets with the middle-schoolers on Mondays, helping them find an event they enjoy. They can choose from a variety of interpretation topics ranging from drama to oratory. Cox is memorizing a humor piece senior Grant Dillivan competed with last year.

“The high-schoolers here have given me a lot of good advice on how I should cut down my script, how I should stand when speaking and suggestions for changing anything in the story itself,” Cox said.

The members are working with the younger students for performances they will do at the Cody tournament on Jan. 24 and at the Powell tournament on Feb. 7.

“I expect great things [from the middle schoolers] because there’s so much talent here,” Speech and Debate team captain and senior Duncan Bond said. “They’re not competing or anything, but I just know that they are going to try their best, even though there’s no reward except for presenting in front of strangers.”

Speech and Debate coaches Mrs. Nicole Maier and Mrs. Lenita Moore figured the creation of the middle school club would be a fun and easy way to help the students without interrupting the high school team.

“It was Mrs. Maier’s idea because there was an article in the newspaper about how the district was trying to increase student participation in activities both at the middle school and high school level,” Mrs. Moore said. “They hired some new coaches and stuff over at the middle school to increase athletics, so we just thought we wanted something for the more academic minded kids to do.

“Speech and debate is not for everybody … obviously speech and debate helps you academically because you learn speaking skills, but it also just helps them come to high school with kind of already a word in place and that’s important.”