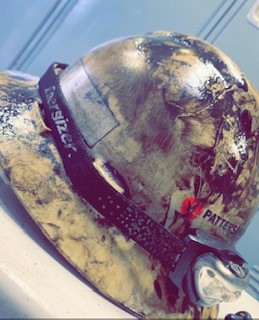 Stephen Preator, a 2018 PHS graduate, was forced to set aside his Patterson-UTI hard hat due to the recent plummet in oil and gas prices.

In this neck of the woods, the oil and gas industry is a massive employer. In many cases, Big Horn Basin residents can name at least one person they know who is involved with or employed by a company that has something to do with oil and/or gas.

And they are concerned.

The recent plummet in prices is due to COVID-19 and some recent activity from other countries. The current oil supply far outweighs its demand in the U.S. And as reserves begin to reach their maximum levels, some local families and businesses find themselves in an unavoidable pickle.

“Lucky for me, the only real effect this crash has had on me is that I’m no longer employed and I’m having to make better financial decisions,” 2018 PHS graduate Stephen Preator said. “I was working for Patterson-UTI for two years. They had 22 crude oil drilling rigs standing in the Rockies before the crash. Currently they have zero rigs operating.”

Since this industry is so monstrous, it’s no surprise this plunge has resulted in hundreds, if not thousands of layoffs and company shutdowns. Unfortunately, many people in the Big Horn Basin have not only seen the effects of this catastrophe, but they’ve felt it as well.

“I’m only one of thousands of Americans who are no longer working,” Preator said. “And many of those people have families, home mortgages, doctor bills and children that they can no longer afford to take care of.”

On the political side of things, President Donald Trump has been pushing to give oil and gas employees as much support as possible. On April 21, he tweeted about the liberties that are being taken to aid those who have been affected. “We will never let the great U.S. oil and gas industry down. I have instructed the Secretary of Energy and Secretary of the Treasury to formulate a plan which will make funds available so that these very important companies and jobs will be secured long into the future.”

And as of Thursday, April 23, crude oil prices had bounced back at least somewhat. According to marketwatch.com, a 20% increase came about as a result of rising tensions in the Persian Gulf between the U.S. and Iran. By Friday, the price had settled at $17.18 per barrel.