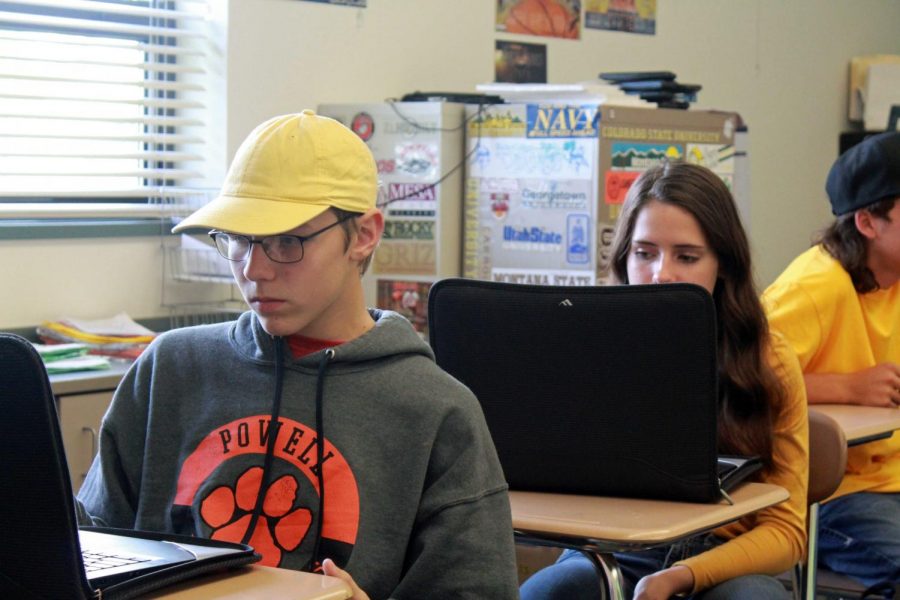 Powell High School sophomores Ben Hawley and Kameron French work on their Lenovos before the closure of schools.

As the year stretches on, more and more is being required from schools. Recently, Park County School District #1 has decided to base their new standard of grading on the “good faith effort” philosophy.

But what does this mean?

“A ‘good faith effort’ is best defined as an attempt to complete assigned work as accurately as possible given the availability of little or no direct instruction,” Superintendent Mr. Jay Curtis said.

Teachers have been required to pay attention to how often their students are accessing the learning material for that class and whether the student is attempting and actively taking part in the assignments. This is accomplished on such learning platforms as Canvas, Infinite Campus and noredink.com, for example.

But the assignments are different for each class.

“Because every class is unique and because different teachers have different remote learning expectations, defining good faith effort is really up to each teacher,” Powell High School Principal Mr. Tim Wormald said. “Some departments have developed a department-wide definition, but each teacher is defining which assignments need to be completed and to what degree in order for the student to be considered to have put forth a good faith effort.”

Because of the way different teachers are handling this grading policy, it is important for students to understand and do what the teacher is expecting. Although all grade levels are being expected to regard and obey this policy, seniors seem to be the main focus of concern.

“I was set up pretty well before everything started, so it was just a matter of finishing strong,” senior Jay Cox said. “I think it’ll mostly affect those seniors who didn’t have the grades they wanted beforehand, because it’s much tougher to improve grades in certain classes because it is difficult to learn new material while in quarantine.”

This has not always been the standard. This grading policy has been developed from the need of online schooling in order to “flatten the curve.”Students who put in a “good faith effort” have options at year’s end: They can choose the letter grade (based on percentage) they earned or select the grade that they had when they left in March due to quarantine. This helps some students but also hurts others. They also have the “CR” option, which means, credit is earned in the class, but it will not impact their letter grade. Incompletes will be made up either during summer school or in the fall during Panther Time, according an email from both Mr. Wormald and Mr. Curtis that has been sent to students and parents.

“I think the grading policy is adaptive for the school and helps many students,” senior Ashlyn Aguirre said. “But it also seems that some students could have been hindered by the grades holding them back.”