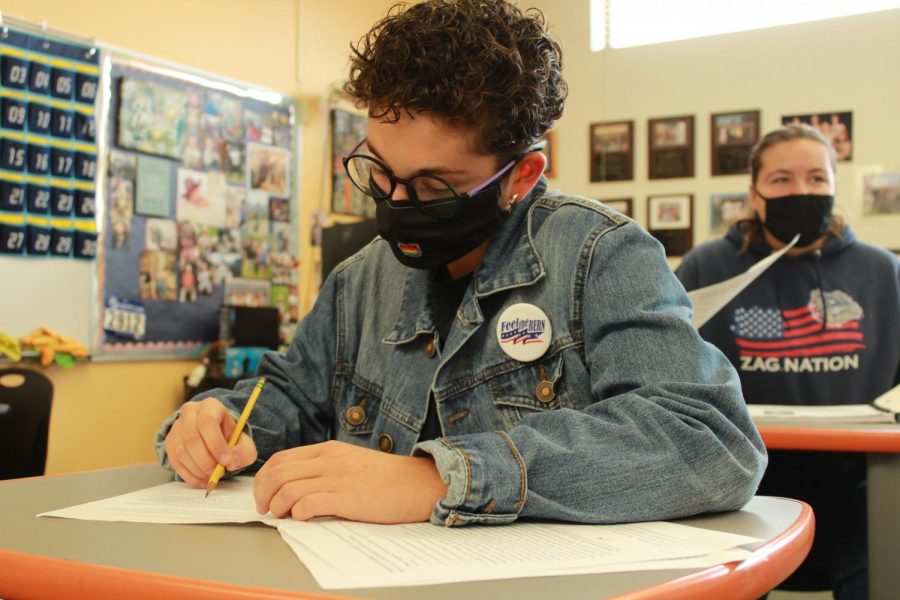 Senior Maggie Cappiello showing off her "Feel the Bern" pin on Red, White and Blue Day

Red, white and blue day started with some controversy.

Like many schools, Powell High School traditionally has dress-up days for the student body to participate in during Homecoming week. The dress-up schedule, as chosen by Student Council, had originally received the suggestion of a red, white and blue day. Powell High School Principal Mr. Tim Wormald suggested choosing a different theme to avoid controversy, such as the type Jackson Hole High School experienced regarding their America day about seven years ago.

Part of the Powell community disagreed with this suggestion and after taking to social media, the PHS administration encouraged Student Council to re-add red, white and blue day to the week.

Homecoming week is meant to unify students. To give them a side to root for and a common enemy (in our case, Cody who we fell victim to during the Homecoming football game). The activities during the week, such as dress-up days, are meant to celebrate and unite towns. Red white and blue day divided the student body rather than unite them.

With the presidential election only weeks away, it was inevitable that red, white and blue day would turn political. Walking into Powell High School and seeing students wearing campaign slogans on everything from masks to socks, I saw that I was correct.

Among these students was junior Cole Frank. Frank was covered from head to toe in stars and stripes. He said that he had been in favor of a red, white and blue dress-up day.

“They represent my country,” Frank said. “I’m a very patriotic person, so they’re my favorite colors.”

The finishing touch to his outfit was the flag he tied around his neck in lieu of a cape. The flag consisted of a photoshopped image of President Trump standing on a tank while holding a .50-caliber rifle. Fireworks explode behind him, an eagle flies nearby.

Frank said it was awesome.

“Most people thought it was cool; there [were] a couple people that just looked at me like, ‘he’s an idiot’,” Frank said. “I get those looks a lot.”

Powell high school senior Maggie Cappiello was not in favor of having a red, white and blue day. She said she felt like it would get too political. I asked her if she thought her assumptions had been correct. She said yes.

Cappiello was the only student I saw during the day wearing something political that wasn’t related to Trump. Cappiello had a Bernie Sanders campaign button pinned to her jean jacket that read ‘feel the Bern’.

“I feel like I knew what today was going to bring and it was my … form of civil disobedience in a way,” Cappiello said. “I’m still wearing red, white and blue, but I’m expressing my political beliefs.”

Cappiello said she had gotten a couple glares because of her button, “but nothing bad,” she said.

Students also wore articles of clothing related to human rights. Senior Hailey Lynn donned a Pride flag while senior Issac Wilson wore a Confederate flag. Although the two flags present separate issues, I asked both students what gave them the idea of wearing their flag to school and the message they wanted to convey.

“With red, white and blue day I didn’t want to do it to just like piss people off… because they think I’m just doing it to be different from them, like just to antagonize them, but I’m not,” Lynn said. “I’m actually doing it because it’s America. America is one of the only places where gay marriage is legal and I’m proud of my country for being able to be accepted by people.”

Lynn is bisexual and said she had chosen to wear the rainbow flag to be inclusive and show support for the LGBT+ community in general.

“I use the rainbow flag mostly because it’s like an umbrella term,” Lynn said. “It used to just be for gay men, but now when people see a rainbow flag it just means the LGBT in general, which is great.”

The flag Wilson wore was a traditional Confederate flag with an M4 carbine in front. Underneath in white text read, ‘come and take it’.

Both Wilson and Lynn said they were aware of the history and any connotations attached to their flags. I asked them what types of reactions they got towards the flags.

Lynn said she had gotten some negative comments regarding her flag. She also said she had two boys that followed her around and repeated ‘gay pride’ in a mocking tone.

“But otherwise, not much,” Lynn said. “I got a lot of positive feedback from like teachers… which, that’s awesome.”

Wilson said he had gotten support from other students regarding his flag.

“There were a lot of students who admired it,” Wilson said. “And thought I was brave wearing it because of what it meant, but still supported it.”

The school’s administration did not have the same type of reaction. Wilson wore the flag up until 5th period, then was required to take it off.

“Because of the common message that the Confederate flag displays and the disputes and arguments it causes in today’s society,” Wilson said. “Usually supporting the South and the Confederates and the slavery and what they did and everything.”

So did red, white and blue day divide students? Absolutely. But on the same note, the situation presented students with a simple question: “should high school students be politically aware?”

Every student I interviewed for this article said yes, they should be.

“I think it’s important to be politically aware,” Cappiello said. “We’re all going to vote someday, you should vote, and I think people are too quick to take into account what their parents’ political beliefs are and not take the time to form their own.”

Added Wilson: “I feel like they should at least have an understanding of what’s going on in the world and around them. I feel like that if they know about it or start to learn about it while they’re in high school it will be a little bit easier when they get to the real world and are on their own.”